Roll-out of the Integrated Fare System 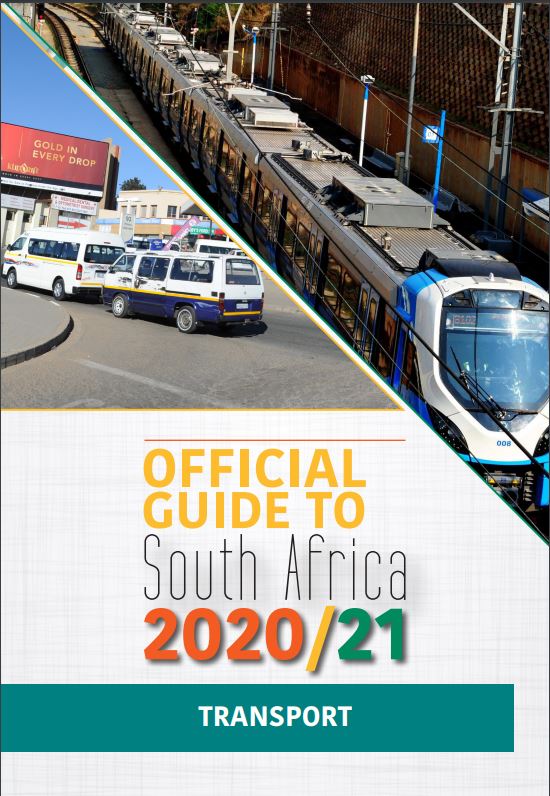 he Department of Transport (DoT) is responsible for legislation and policies for rail, pipelines, roads, airports, harbours, and the intermodal operations of public transport and freight. As such, it is responsible for conducting sector research, formulating legislation and policy to set the strategic direction of subsectors, assigning responsibilities to public entities, regulating through setting norms and standards, and monitoring implementation.

Over the medium term, the department planned to give effect to policies that focus on maintaining national and provincial road networks, addressing passenger rail challenges, and facilitating the provision of integrated public transport networks.

The Gibela factory in Ekurhuleni continues to ramp up its production capacity as new trains roll off the assembly line every month. Despite the Coronavirus Disease (COVID-19) disruptions, as at March 2021, 25 new trains had been provisionally accepted for delivery, bringing the total number of new trains delivered by mid-2021 to 61. As at end of February 2021, a total of 878 jobs were created in the Rolling Stock Fleet Renewal Programme.

The DoT is committed to reducing the carnage on the roads by 25% by March 2024. In addition to encouraging responsible driver behaviour, the department planned to change traffic policing from a regular job to one that is undertaken 24 hours a day and seven days a week.

By mid-2021, the DoT was intensifying its efforts towards the implementation of the movement from road to rail with regard to both passengers and freight.

The two passenger corridors identified for concessioning are the Thabanchu-Botshabelo to Bloemfontein in the Free State and Pienaarsriver-Hammanskraal to Pretoria line in Gauteng.

According to the Statistics South Africa’s (Stats SA) General Household Survey (GHS) of 2019, under two-thirds (62,1%) of the learners walked to school, while a further 9,6% travelled by private car, and 7,5% used taxis. The most commonly used mode of transport to travel to work was a private car (33,1%), followed by taxis (26,3%) and walking (21,5%). The survey found that 9,8% of the working population worked from home and that they therefore had no need for transport.

Roll-out of the Integrated Fare System

The DoT was expected to gazette final amendments to the Integrated Fare System Regulations in 2021, which would enable the introduction of an integrated single ticketing system for public transport. The system will operate on the

Transaction Clearing House of SANRAL, which will be the back-end platform for all transactions. The first roll-out of the integrated single ticket was expected to unfold during 2021 in several cities.

SANRAL plays a crucial role in programmes related to upgrading, maintaining and strengthening national toll and non‐toll roads. It was expected to focus on the R573 (Moloto Road) development corridor.

The Passenger Rail Agency of South Africa (PRASA) has struggled for many years to roll out its modernisation programme, which is meant to improve the reliability of services and increase the number of passengers. The modernisation programme entails focused spending on repairs and maintenance as part of the agency’s rolling stock fleet renewal programme, as well as improved security.

Delays in the rolling stock fleet renewal programme, along with poor spending on rail infrastructure and the effects of the COVID-19 pandemic, specifically lockdown restrictions, necessitated the reprioritisation of funds to support other entities in the transport sector.

The SANRAL was established in terms of the SANRAL and National Roads Act of 1998. The agency is responsible for the planning, design, construction, operation, management, control, maintenance and rehabilitation of the South African national road network, including the financing of these functions.

This includes toll and non‐toll roads. Over the medium term, the agency will continue to focus on the construction, maintenance and overall preservation of the national road network. The agency derives its revenue mainly through transfers from the department, toll fees and rental income.

This includes hearing complaints and appeals aimed at ensuring fairness, transparency and competitive practices in the ports system. Over the medium term, the regulator planned to continue developing and reviewing policy, strategy and research for an effective regulatory framework for the economic regulation of ports.

The ATNS Company was established in terms of the ATNS Act of 1993. The company is mandated to provide safe, orderly and efficient air traffic navigational and associated services to the air traffic management community, and in accordance with the standards set out by the International Civil Aviation Organisation.

Over the medium term, the company planned to provide air traffic management solutions that are responsive to regional, continental and global demands, trends and technological advancements.

The CBRTA was established in terms of the CBRTA Act of 1998 to improve the cross‐border flow of passenger and freight transport operators, and regulate market access.

Over the medium term, the agency will continue to improve efficiencies in crossborder road transport and improve cross‐border operations by implementing a risk‐based accreditation scheme to ensure the seamless movement of compliant operators across borders.

Its legislative mandate covers all railway operators in South Africa and those of neighbouring countries whose rail operations enter South Africa. Over the medium term, the regulator will continue to focus on improving railway safety and providing an independent regulatory function that focuses particularly on high‐risk areas to ensure minimal rail incidents.

The RAF Act of 1996 provides for the establishment of the RAF, which is mandated to compensate South African road users for losses or damages caused by motor vehicle accidents within the borders of South Africa. The fund receives its revenue from the road accident fund levy in terms of the Customs and Excise Act of 1964.

The RTIA was established in terms of the Administrative Adjudication of Road Traffic Offences Act of 1998. It is mandated to administer procedures that discourage the contravention of road traffic laws by enforcing penalties and providing community awareness programmes.

Over the medium term, the agency plans to discourage and penalise the contravention of road traffic laws, and develop efficient adjudication processes in line with the Act.

The RTMC is a public entity established in terms of the Road Traffic Management Corporation Act of 1999 to provide national road traffic strategic planning and law enforcement, and pool public sector resources for the provision of road traffic management.

The SACAA was established in terms of the South African Civil Aviation Authority Act of 1998 to enforce safety standards in the civil aviation industry. Over the medium term, the authority will continue to focus on improving compliance and adherence to the standards and recommended practices of the International Civil Aviation Organisation.

The SAMSA was established in terms of the SAMSA Act of 1998 to advance South Africa’s maritime interests, which include ensuring the safety of life and property at sea, and preventing and combating pollution of the marine environment. Over the medium term, the authority will continue to focus on building on its maritime safety and environmental protection capabilities.

The NATMAP 2050 is aimed at delivering a dynamic, long-term and sustainable transportation system framework which is demand responsive and that provides a coordinated transport agenda for the whole country. The NATMAP recognises that efficient, affordable and reliable transport systems are critical components of national economic development.

Rural transport development ensures better mobility and access in rural areas. The national transport survey found that a higher percentage of the population cannot afford the high cost of transport. This limits their access to transport and therefore social and economic opportunities. This perpetuates underdevelopment and isolation from mainstream public transport system.

The National Land Transport Act of 2009 provides for different levels of government to be responsible for planning. The Rural Transport Strategy is expected to contribute to the formulation of the National Planning Guidelines for rural district municipalities’ public transport network plans.

Civil aviation serves as a major catalyst for global economic activities and is vital to trade and tourism. South Africa’s major airports include:

The National Scholar Transport Policy provides a framework for safe and secure transport for learners through the cooperation of stakeholders and lawenforcement authorities. The DoT developed the national operational guidelines to remedy operational challenges that provinces have in implementing the Scholar Transport Programme.

The DoT continues to make a difference in the lives of many learners in rural and farmland areas through the Shova Kalula initiative, which supplies learners with non-motorised mobility in the form of bicycles.

The taxi industry remains the most important part of South Africa’s public transport system. Taxis are the preferred type of road transport. With more than 200 000 taxis on the road, the taxi industry generates about R40 billion per year and has created approximately 300 000 direct and indirect job opportunities, including drivers, taxi marshals and administrative support.

The DoT is committed to scrapping 63 000 taxis by 2024 as part of the Revised Taxi Recapitalisation Programme, which is key to efforts by government to transform public transport.

According to the Stats SA’s GHS of 2019, about 37,8% of South African households had at least one household member who used a minibus taxi/sedan taxi/bakkie taxi during the week preceding the survey. Provinces with the highest levels of minibus taxi use were: Gauteng (45,7%), Mpumalanga (38,3%), and KwaZulu-Natal (38,2%).

By comparison, 5,6% of South African households used a bus during the preceding week. It is notable that 15,5% of households in Mpumalanga used the bus. The use of trains was most common in Western Cape (4,2%) and Gauteng (3,7%).

An integrated public transport network is central to the functioning of hubs of economic activity as they provide sustainable, affordable and functional transport solutions to urban commuters. The DoT aims to increase operating hours for BRT to 20 hours a day by 2024.

The rapid public transport networks in South Africa include:

The Gautrain is an 80-km long mass rapid transit railway system that links Johannesburg, Pretoria and OR Tambo International Airport. It was built to relieve traffic congestion in the Johannesburg-Pretoria traffic corridor and offer commuters a viable alternative to road transport, as Johannesburg had limited public transport infrastructure.

All stations with the exception of the Airport Station have integrated car parking facilities.

South African’s length of the coastline is estimated to be approximately 3 000 km. The Maritime Transport Policy aims to enhance certainty in the transport sector and the logistics market.

The objectives of the Arrive Alive Road-Safety Campaign, especially during the Easter and December holidays, are to reduce the number of road-traffic accidents in general and fatalities in particular, and improve road-user compliance with traffic laws.

The goals of the campaign are to: