Department of Justice and Constitutional Development

Correctional Supervision and Parole Board 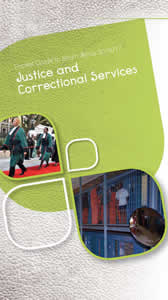 Department of Justice and Constitutional Development

The DoJ&CD’s constitutional mandate provides a framework for the effective and efficient administration of justice and to promote constitutional development through the development and implementation of legislation and programmes to advance and sustain constitutionalism and the rule of law.

The strategic goals of the department relate to ensuring safer communities, fighting corruption and enhancing accountability for all people in South Africa to feel and be safe.

The department facilitates the effective and efficient resolution of disputes by providing accessible, efficient and quality administrative support, thereby improving the finalisation rates of cases; helping to clear the backlogs of criminal, civil and family matters by the courts and justice service points; providing access to quality guardian and probate services for citizens.

The SCA, situated in Bloemfontein in the Free State, is the highest court in respect of all matters other than constitutional ones. It consists of the President and Deputy President of the SCA, and 23 other judges of appeal. The SCA has jurisdiction to hear and determine an appeal against any decision of a high court.

A high court has jurisdiction in its own area over all persons residing or present in that area. These courts hear matters that are of such a serious nature that the lower courts would not be competent to make an appropriate judgment or to impose a penalty. Except where a minimum or maximum sentence is prescribed by law, their penal jurisdiction is unlimited and includes handing down a sentence of life imprisonment in certain specified cases.

There are 13 high courts:

Magistrates’ Courts form an important part of the judicial system as it is where ordinary people come into contact with the justice system daily. Besides the 43 new courts, the department has refurbished and equipped a further 24 branch courts and elevated them into proper courts. The outstanding 65 branch courts and 230 periodical courts have been lined-up for rehabilitation consistent with the National Development Plan.

The Small Claims Court allows you to institute minor civil claims not exceeding R15 000 in a speedy, affordable and simple manner without using an attorney.

Any person who has been unfairly discriminated against in terms of section 9 of the Constitution may approach the Equality Court. Most of the complaints dealt with include hate speech, unfair discrimination and harassment.

Community courts, such as the Hatfield Community Court in Pretoria, are normal district magistrates’ courts that assist in dealing with matters in partnership with the community and business. These courts focus on restorative justice processes, such as diverting young offenders into suitable programmes.

The courts feature specially trained officials, procedures and equipment to reduce the chance of secondary trauma for victims. By March 2016, the DoJ&CD had upgraded 46 regional courts into sexual offences courtrooms.

The NRSO is a record of names of those found guilty of sexual offences against children and mentally disabled people.

The register gives employers in the public or private sectors such as schools, crèches and hospitals the right to check that the person being hired is fit to work with children or mentally disabled people.

Maintenance is the obligation to provide another person, for example a minor, with housing, food, clothing, education and medical care, or with the means that are necessary for providing the person with these essentials.

As part of further improving the maintenance system, the Maintenance Amendment Act of 2015 was enacted to ensure that every child receives the appropriate parental care, basic nutrition, shelter, basic heathcare services, education and other related support. The amendment also ensures the blacklisting of defaulters.

To curb gender-based violence, government has adopted a zero-tolerance towards rape, violation of the rights of lesbian, gay, bisexual, trans-gender and intersex people, and other forms of violence towards women and children.

Human trafficking has become a focus of attention in the country following the introduction of the new visa requirements for children travelling through South Africa’s ports of entry. Legislation aimed at preventing trafficking defines trafficking to include the recruitment, transportation, sale or harbour of people by means of force, deceit, the abuse of vulnerability and the abuse of power for exploitation.

To curb the growing abuse of drugs, the DoJ&CD has amended Schedules 1 and 2 of the Drugs and Drug Trafficking Act of 1992 to make the use and possession of drugs such as Nyaope a criminal offence.

Legal Aid SA provides legal aid or makes legal aid available to indigent persons within the budget allocated to it by the State.

The SIU works closely with the NPA to ensure that prosecutions take place as soon as possible. It also works with the AFU in cases where the powers of this unit are more suitable for recovering the proceeds of crime.

The NPA structure includes the National Prosecutions Service (NPS), the Witness-Protection Programme, the AFU and units such as the Sexual Offences and Community Affairs (SOCA) Unit, the Specialised Commercial Crime Unit (SCCU) and the Priority Crimes Litigation Unit.

The role of the Family Advocate is to promote and protect the best interests of the children in civil disputes over parental rights and responsibilities.

SOCA acts against the victimisation of vulnerable groups, mainly women and children. One of the unit’s key achievements in ensuring government’s commitment to the fight against sexual offences and gender-based violence is the establishment of Thuthuzela care centres (TCCs).

The TCC concept is recognised by the UN General Assembly as a “world best-practice model” in the field of gender-violence management and response. The TCCs are one-stop facilities located in public hospitals that aim to provide survivors with a broad range of essential services – from emergency medical-care counselling to court preparation – in a holistic, integrated and victim-friendly manner. The Thuthuzela Project is supported by the roll-out of victim support rooms in an effort to show empathy to victims of violent crime, especially in cases of sexual offences, child abuse and domestic violence.

The FCS units have been reintroduced in all 176 South African Police Service clusters across the country. To give further impetus to the investigation of crimes of this nature, forensic social workers were appointed to assist in cases of child sexual abuse by conducting forensic assessments, compiling court reports and providing expert evidence in court.

The PCLU is a specialist unit mandated to tackle cases that threaten national security. The PCLU was created by presidential proclamation and is allocated categories of cases either by the President or by the National Director.

A significant majority of the NPA’s prosecutors are housed in the NPS, the organisation’s biggest unit. The NPS is headed by the Deputy Director of Public Prosecutions (DPPs). They head the respective regional jurisdictions, which are attached to the high courts of the country. All the public prosecutors and state advocates manning the district, regional and high courts
report to the DPPs in their respective areas of jurisdiction.

The SCCU’s mandate is to effectively prosecute complex commercial crime cases emanating from the commercial branches of the SAPS. The client base of the unit comprises a broad spectrum of complainants in commercial cases, ranging from private individuals and corporate bodies to state departments.

The Public Protector investigates complaints from the public or on own initiative against government at any level, its officials, persons performing public functions, corporations or companies where the State and statutory councils are involved. The Public Protector’s services are free and available to everyone.

Complainants’ names are kept confidential as far as possible. The President appoints the Public Protector on recommendation of the National Assembly and in terms of the Constitution, for a non-renewable period of seven years.

The Public Protector is subject only to the Constitution and the law, and functions independently from government and any political party. No person or organ of State may interfere with the functioning of the Public Protector.

The DCS remains committed to placing humane and safe detention and rehabilitation at the centre of service delivery. In doing so, the department strives to promote corrections as a societal responsibility, contributing to enhanced public safety and reducing re-offending.

The strategic goals of the department are to ensure that:

In this way, the department contributes to ensuring that all people in South Africa are and feel safe.

The Correctional Matters Amendment Act of 2011 provides for a new medical parole policy and correctional supervision.

Correctional Supervision and Parole Board

In such cases, recommendations are submitted to the courts that in turn will make a decision in respect of conditional placement.

There are 52 Correctional Supervision and Parole Boards countrywide. These boards are chaired by community members who are regarded as suitable and capable of carrying out the responsibilities.

The DCS provides the members with intensive training in respect of the processes, legislative implications and relative policies.