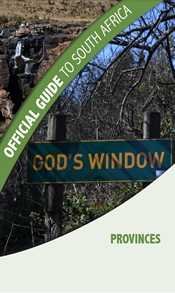 South Africa has nine provinces, which vary considerably in size. The smallest is tiny and crowded Gauteng, a highly urbanised region, and the largest the vast, arid and empty Northern Cape, which takes up almost a third of South Africa’s total land area.

Each province has its own Legislature, Premier and Executive Council. The country has common boundaries with Namibia, Botswana and Zimbabwe, while Mozambique and Eswatini lie to the north-east.

Completely enclosed by South African territory in the south-east is the mountain kingdom of Lesotho. South Africa has three capitals:

The Eastern Cape, lying on the south-eastern South African coast, is a region of great natural beauty, particularly the rugged cliffs, rough seas and dense green bush of the stretch known as the Wild Coast. In the Eastern Cape, various floral habitats meet. Along the coast, the northern tropical forests intermingle with the more temperate woods of the south.

The province is serviced by airports situated in Port Elizabeth, East London, Mthatha and Bhisho.

The Free State, a province of wide horizons and blue skies, farmland, mountains, goldfields and widely dispersed towns, lies in the heart of South Africa.

Between the Vaal River in the north and the Orange River in the south, this immense rolling prairie stretches as far as the eye can see.

Mining, particularly gold, is the biggest employer, followed by manufacturing.

The Free State also produces high-quality diamonds from its kimberlite pipes and fissures, and the country’s largest deposit of bentonite is found in the Koppies district.

The National Development Plan has intensified the mining potential that still exists in the goldfields region of Matjhabeng in the Lejweleputswa District as a job intervention zone.

The capital, Bloemfontein, houses the Supreme Court of Appeal, a leading university and some top schools. Important towns include Welkom, Sasolburg, Odendaalsrus, Kroonstad, Parys, Phuthaditjhaba, Bethlehem.
The charming village of Clarens situated in the rolling foothills of the Maluti Mountains. Some of South Africa’s most valued San rock art can be found in the Free State.

Other key tourist attractions in the province include the majestic Golden Gate National Park, the annual air show in Bethlehem, the Cherry Festival in Ficksburg, and the Fauresmith  International Endurance Ride equestrian event.

The annual Mangaung African Cultural Festival, known as Macufe, is hosted in partnership with the Tourism Authority and the Performing Arts Centre of the Free State.

The Vredefort Dome, 10 km in diameter, is on the United Nations’ (UN) World Heritage Site List.

Gauteng is the smallest of South Africa’s nine provinces but comprises the largest share of the South African population. Financial and business services, logistics, manufacturing, property, telecommunications and trade are some of the most important economic sectors.

The province is an integrated industrial complex with major areas of economic activity in three subregional areas, namely the Vaal Triangle; the East, West and Central Rand, and Pretoria.

Most overseas visitors enter South Africa via OR Tambo International Airport. Some 50 km north of Johannesburg lies Pretoria, the administrative capital of South Africa and home to the Union Buildings.

KwaZulu-Natal, one of the country’s most popular holiday destinations, is the province with the second largest population. This verdant region includes South Africa’s lush subtropical east coast. Washed by the warm Indian Ocean, it stretches from Port Edward in the south, and northwards to the Mozambique boundary.

In addition to the magnifcent coastline, there is the sweeping savanna in the east, and the majestic Drakensberb mountain range in the west that offers some of the country’s most awe-inspiring landscapes.

Within the area is a vast 243 000-hectare sweep of basalt summits and buttresses. This section was formally granted World Heritage status in November 2000, and was renamed uKhahlamba-Drakensberg Park.

Visitors can enter the province through the King Shaka International Airport at La Mercy, north of Durban or use the extensive national road network. There are also two major harbours – the port of Durban, which is one the busiest in Africa, and Richards Bay, which is an important coal-export harbour.

There are several tertiary institutions of learning, such as the University of KwaZulu-Natal and the Durban Institute of Technology.

KwaZulu-Natal is the only province with a monarchy specifically provided for in the Constitution of the Republic of South Africa of 1996.

Limpopo, South Africa’s northernmost province, borders onto Mozambique, Zimbabwe and Botswana, making it the ideal entrance to Africa. Named after the Limpopo River that flows along its northern border, the province is rich in wildlife, spectacular scenery and a wealth of historical and cultural treasures.

This province is in the Savanna Biome, an area of mixed grassland and trees, which is generally known as bushveld. The province’s natural resources include more than 50 provincial reserves, as well as several private game reserves. The largest section of the Kruger National Park is situated along the eastern boundary of Limpopo with Mozambique.

Mpumalanga means Place where the sun rises. Due to the provinces spectacular scenic beauty and abundance of wildlife, it is one of South Africa’s major tourist destinations. Mpumalanga falls mainly within the Grassland Biome. The escarpment and the Lowveld form a transitional zone between this grassland area and the Savanna Biome.

The area has a network of excellent roads and railway connections, making it highly accessible. Mpumalanga is also served by a number of small airports, such as the Kruger Mpumalanga International Airport.

Mbombela is the capital of the province and the administrative and business centre of the Lowveld. Other important towns are eMalahleni, Standerton, Piet Retief, Malalane, Ermelo, Barberton and Sabie.

The site comprises 40% of the Barberton Greenstone Belt, one of the world’s oldest geological structures. The Barberton Makhonjwa Mountains represent the best-preserved succession of volcanic and sedimentary rock dating back 3,25 to 3,6 billion years.

The province is noted for its San rock art, diamond diggings, 4X4 safaris and the Kgalagadi Transfrontier Park. It is a vast stretch of semi-desert land. The province is renowned for its spectacular display of spring flowers which, for a short period every year, attracts thousands of tourists.

Sutherland hosts the southern hemisphere’s largest astronomical observatory, the multinational-sponsored Southern African Large Telescope. The Northern Cape is one of two sites to host the Square Kilometre Array radio-telescope (better known as the SKA Project), the largest and most advanced radio telescope in the world.

Among many other benefits, the province’s tourism and hospitality industry is profiting from the project, as scientists and other interested parties are flooding into the town of Carnarvon. Electrical power generation presents an opportunity for greater economic diversification and growth in the province.

North West lies in the north of South Africa, on the Botswana border, fringed by the Kalahari desert in the west, Gauteng to the east, and the Free State to the south. Sun City, the Pilanesberg National Park, the Madikwe Game Reserve, the Cradle of Humankind Site, the Taung Heritage Site, the De Wildt Cheetah and Wildlife Trust and the Lesedi Cultural Village are some of the tourist attractions.

Some of the largest cattle herds in the world are found at Stellaland near Vryburg, which explains why this area is often referred to as the Texas of South Africa. Marico is also cattle country. North West is South Africa’s major producer of white maize. Mining contributes immensely to North West’s economy and the South African mining industry.

It is known as the Platinum Province due to its abundant mineral riches of platinum, chrome and the platinum group metals. It is also home to a strong dimension stone sector, due to the riches of its slate, marble and granite deposits. The Rustenburg and Brits districts produce 94% of the country’s platinum. In addition to granite, marble, fluorspar and diamonds, the province also produces a quarter of South Africa’s gold

Situated on the south-western tip of Africa, the Western Cape with its wide beaches and breathtaking scenery, complemented by a rich variety of cultures, historical landmarks, world-class restaurants and entertainment, is a world-famous tourist destination.

Table Mountain, the Cape winelands, Robben Island and the Kirstenbosch Botanical Gardens are among the province’s most popular tourist attractions.

553 000 ha stretching from the Cape Peninsula to the Eastern Cape. The Knysna-Tsitsikamma region has the country’s biggest indigenous forests.

Cape Town has proved again that it’s a film-friendly destination and it is reaping the benefits.