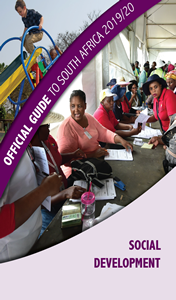 The Department of Social Development (DSD) provides social protection services and leads government’s efforts to forge partnerships through which vulnerable individuals, groups and communities become capable and active participants in the development of their societies.

The National Development Plan acknowledges that it is necessary to address the critical challenges of poverty, unemployment and inequality to improve the short‐term and long‐ term prospects of current and future generations.

In its efforts to give expression to this guiding policy, the DSD aims to improve quality of life for poor and vulnerable people, and in so doing, contributes to Priority 3 (consolidating the social wage through reliable and quality basic services) and Priority 6 (a capable, ethical and developmental state) of government’s 2019‐2024 Medium Term Strategic Framework. The department focuses on reducing poverty and inequality; increasing access to early childhood development (ECD) services; reducing social ills and empowering individuals, families  and  communities;  and  creating  a  functional,  efficient  and  integrated  social development sector.

Other pieces of legislation which define the department’s mandate include the:

The department is also the custodian of international human rights treaties that the country has ratified, focusing on protecting the rights of children, people with disabilities and older people. This includes coordinating the implementation of these treaties, and compiling periodic country reports.

In addressing the critical challenges of poverty, unemployment and inequality, over the medium term, the DSD intends to focus on deepening social assistance and extending the scope of social security; reforming the social welfare sector and its services to deliver better results and strengthening community development interventions.

This work gives expression to the National Development Plan’s vision of improving the short- and long-term prospects of current and future generations, and Outcome 13 (an inclusive and responsive social protection system) of government’s 2014-2019 Medium Term Strategic Framework.

As one of the chief departments responsible for alleviating poverty and providing assistance to vulnerable individuals and communities, the DSD implements and supports programmes focused on food relief, capacity building, and response to social distress. The department will continue to provide social assistance to eligible individuals whose income and assets fall below set thresholds through social grants administered by the South African Social Security Agency (SASSA).

By the end of 2019/20, an estimated 18 million beneficiaries, including elderly people, war veterans, people with disabilities and children, were receiving monthly social grants. This number is expected to increase to 18.9 million by 2022/23.

The department acknowledges that continued reliance on social assistance from the State as the only form of income is not sustainable. There is a need for the government to continue to develop and implement programmes that support the poor and vulnerable to establish their own income‐generating activities, with a specifi  focus on young people and women.

In recognising that a good foundation to learning and capacity development forms part of a long‐term solution to reducing inequality, ensuring universal access to ECD services for children aged younger than five remains a key priority for the department.

The DSD launched the Vhangasali programme that encourages ECD centres to formalise themselves by registering with the department. Vhangasali is a Xitsonga phrase meaning, “Do Not Leave Them Behind!” This initiative targeted at ensuring that informal and unregistered ECDs are not left behind. In being formalised, ECDs can qualify to receive government support.

Another important aspect about Vhangasali is for ECDs to share information with the department through assessment forms which can be accessed from the provincial departments.

The aim of Vhangasali is to make sure that the unregistered and partially registered ECDs comply with the norms and standards and receive assistance from Government.

Violence against women and children continues to affect the well-being of people, families and communities. Its prevalence requires a concomitant response from government, civil society organisations and broader society. The department plans to design a standardised welfare package to improve the quality of services offered and adequately respond to an increasing number of reported social problems. The package will include essential minimum psychosocial support, and norms and standards for substance abuse, violence against women and children, and other problems affecting families and communities.

Whereas provincial departments, the SASSA and the National Development Agency (NDA) are mainly responsible for service delivery, the DSD has a responsibility to develop legislation and policies. The department aims to prioritise the transformation and standardisation of social welfare services by developing and coordinating overarching policies and legislative frameworks, norms and standards that promote integrated, quality‐driven, professional and accountable service delivery, with the ultimate aim of improving quality of life for poor and vulnerable people.

To alleviate the high rate of poverty in South Africa, government has institutionalised a comprehensive social protection system. This includes unconditional cash transfers, most of which are aimed at supporting poor individuals from vulnerable demographic groups, such as children, older people and people with disabilities.

TThe NDA’s primary focus is on strengthening the institutional capacity of civil-society organisations that provide services to poor communities. The agency also promotes consultation and dialogue between civil society and the State, debates policy development, and conducts research.

The objectives of SASSA are to ensure the effective and efficient administration, management, and payment of social assistance grants.

The agency’s core business is to administer and pay social assistance transfers. It has a large network of centres where citizens can apply for social grants, and manages a large payment system of more than 17 million monthly social grants.

The National Drug Master Plan (NDMP) 2019-2024 was launched on 26 June 2020. The NDMP is a blueprint for combating the scourge of alcohol and substance abuse which has reached epidemic proportions in South Africa. The overarching goal of the NDMP is to prevent drug use before it starts, early intervention to ensure substance users receive treatment and rehabilitation services and reducing the demand for illicit drugs..

South Africa is continually striving to do more to stop new HIV infections and prevent AIDS- related deaths. The National Strategic Plan on HIV, Sexually Transmitted Infections and Tuberculosis (2017-2022) under the slogan “Let Our Actions Count”, guides the country’s response to these infections, seeks to reduce new HIV infections by 63% – from 270 000 in 2016 to less than 100 000 by 2022.

Spending on HIV and AIDS-related support, prevention and mitigation programmes also forms a large part of transfers to NPOs, and the South African National AIDS Council has partnered with the DSD in the selection of NPOs to undertake HIV and AIDS prevention and psychosocial support programmes.

According Stats SA’s Mid-year population estimates of 2020, the estimated overall HIV prevalence rate was approximately 13,0% among the South African population. The total number of people living with HIV was estimated at approximately 7,8 million in 2020. For adults aged 15-49 years, an estimated 18,7% of the population was HIV positive.

The 2015 White Paper on the Rights of Persons with Disabilities (WPRPD) calls for government, civil society and the private sector to work together to ensure the socio- economic inclusion of persons with disabilities. Government seeks to create a caring and inclusive society that protects and develops the human potential of its children, a society for all where persons with disabilities enjoy the same rights as their fellow citizens, and where all citizens and institutions share equal responsibility for building such a society.

The WPRPD is intended to accelerate transformation and redress regarding full inclusion, integration and equality for persons with disabilities. South Africa has been celebrating the annual International Day for Persons with Disabilities since 1997.

According to Stats SA’s General Household Survey of 2019, some 6,6% of South Africans aged five years and older were classified as disabled in 2019.

A larger percentage of women (7,1%) than men (6,1%) were classified as disabled. Northern Cape (12,8%), Eastern Cape (8,8%) and Free State (8,7%) presented the highest prevalence of disability in the country. Since older populations are more likely to have a higher prevalence of disability, the lower prevalence in Western Cape (4,7%) and Gauteng (5,0%) could be ascribed to the relatively youthful population that is often associated with net in-migration in these provinces.

In October 2020, Cabinet approved the third revised NYP 2020-2030, which is a cross- sectoral policy that was developed by representative government departments, civil- society partners, institutions of higher learning and business bodies. It replaced the NYP 2015-2020, which expired at the end of December 2020.

It improves upon and updates the previous policies by speaking to the new challenges that South Africa’s youth faces, while acknowledging that there is more to be done to address the challenges identified in the previous NYPs.

It takes into cognisance the realities that the country’s economy faces, mainly sluggish growth and indeed the challenges of Africa and the rest of the developing world. It also identifies the potential human capital inherent in young people as an untapped potential that should be harnessed for the benefit of the whole society.

The policy proposes interventions that enable positive youth development, for young people as individuals and as members of families, communities and the South African society. It invests in the enhancement of their capabilities to transform the economy and the country.

Blind SA is an organisation for the blind and is governed by the blind. Situated in Johannesburg, it is aligned with other member organisations throughout South Africa. The organisation provides, among other things, study bursaries for visually impaired students for further education, Braille publications in all of South Africa’s official languages, Braille training that entails writing and reading, and orientation and mobility training.

The SABA was established in May 2012 as an NGO. Its purpose is to set and maintain standards for Braille in all 11 official languages of South Africa.

The SANCB is the coordinating body for over 100-member organisations throughout South Africa. These organisations span the full spectrum of services offered for and to blind and partially sighted persons.

Support for the hearing impaired

South Africa’s national organisation for the hearing impaired is the Deaf Federation of South Africa (DeafSA), formerly the South African National Council for the Deaf, which was established in 1929.

Other private organisations include the National Institute for the Deaf and the South African National Deaf Association.

The Older Persons Act of 2006 aims to enhance the quality of life and improve the health of older persons by engaging them in programmes that promote social, physical, mental and emotional well-being to prevent or delay the onset of ageing challenges and keep old age related illness at bay.

The Older Persons’ Parliament takes place annually in October. It gives elders the opportunity to engage with the executive on critical issues affecting their lives.

The proportion of elderly persons aged 60 and older is increasing over time.