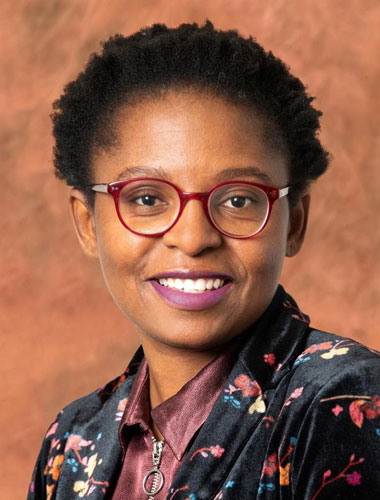 Ms Khumbudzo Ntshavheni is the Minister of Communications and Digital Technologies. She holds an MBA degree from the University of Bradford in the United Kingdom. She is also a graduate of Rand Afrikaans University (RAU), where she read for her undergraduate degree in Political Science and concurrently completed two postgraduate degrees in Development Studies and Labour Relations. She matriculated from Mbilwi Secondary school in Sibasa, Limpopo. Mbilwi remains one of the best performing public schools.

She started her career as a junior lecturer at the University Of South Africa (UNISA) and then proceeded to be South Africa's youngest and first female Spokesperson of a Premier (Premier Ramatlhodi of Northern Province/ Limpopo). She later worked as a Chief Information Officer for the department of Local Government and Housing (Limpopo) and a Manager for Tourism Investment for the Trade and Investment Limpopo (TIL). Ms Ntshavheni was once the youngest Municipal Manager in South Africa when she worked in that position for the Ba- Phalaborwa Municipal Council and she also worked as Chief Operations Officer at the State IT Agency (SITA).

Her political career cuts across both the student and youth movements. She was the youngest activist and part of the leadership of the South African Youth Congress (SAYCO) in the then Northern Transvaal. She was part of the young student activists who mobilised and led the Congress of South African Students (COSAS) after it had unbanned itself in 1989.

On the day of the release of President Nelson Mandela, she addressed the Far Northern Transvaal sub-region's (present day Vhembe Region) impromptu celebration rally on behalf of the Pioneers Movement she was leading. At the age of 14, she convinced President Nelson Mandela to adopt 16 years as the voting age of South Africa during the CODESA negotiations (this was when President Cyril Ramaphosa was the Secretary-General of the ANC). She has led both the youth and student movement at various capacity, including national executive committees. She has also led the ANC in her home Province of Limpopo including at the Provincial Executive Committee level, which she was also a Spokesperson for.
Before joining the 6th Parliament of the Republic of South Africa, Ms Ntshavheni was a serial entrepreneur with interests in transport, FMCG and agriculture.

His Excellency, President Cyril Ramaphosa appointed her the Minister of Communications and Digital Technologies on 05 August 2021. She was previously appointed Minister for Small Business Development on 29 May 2019 and acting Minister in the Presidency on 27 January 2021 until 05 August 2021

Ms Khumbudzo Ntshavheni served as the Municipal Manager of Ba-Phalaborwa Municipality in Limpopo, a position that she held from April 2008 until November 2010 . Her previous professional responsibilities include Tourism Manager: Trade and Investment Limpopo and Chief Information Officer for the Department of Local Government and Housing (Limpopo), Spokesperson to the Premier of Limpopo, Lecturer at the University of South Africa.

She holds a MBA degree from Bradford University in the United Kingdom (2008). Her other qualifications include BA Hons Development Studies (1999) and BA Hon Labour Relations (1999) both from the University of Johannesburg former RAU.

She has vast work experience in Strategic Management, Information Technology, Change Management, and Communication & Marketing. She is the founding Director and Chairwoman of Nkho Trading a transport business with interests in property development.