The Minister of Higher Education, Science and Technology Dr Blade Nzimande today announced the results of the survey conducted by the Human Sciences Research Council of the impact and awareness of the coronavirus amongst South Africans that is currently sweeping across the world, including the country.

The survey was conducted on the #datafree Moya Messaging social media platform and reached 19 330  respondents.  The Moyo Messaging platform was chosen because of its large user base of about four million members and one million daily engaged users.

With a view to reaching the required respondents, the HSRC worked with a range of partners, including, the University of KZN, SAPRIN (Agincourt), Walter Sisulu University, NIHSS and Acumen Media.

Although the global community is learning about the virus and its behaviour on a daily basis, it has been shown that due to its highly infectious nature, the best way to protect oneself from infection is social distancing and the regular washing of hands and cleaning of surfaces.

This will require behaviour and attitude changes.  South Africa’s experiences with HIV and AIDS as well as TB has shown that the most resilient behaviour changes will be built upon an evidence based understanding of the diseases and what will be required in terms of behaviour, attitude and perceptions changes to turn the tide of the infection rate.

The study therefore sought to mine data that will lead to a context-specific health and wellbeing frameworks required to address individual, family, community and society at large at primary prevention, early detection and patient care levels as well as long-term mitigation of the impact of the pandemic.

How the survey was conducted

The HSRC’s research response to the  COVID-19 outbreak employed a mixed methods approach with:

The sample included South Africans of all race groups aged 18 years and older, including healthcare workers.  The data was benchmarked (weighted) to the distribution of South Africa’s adult population using the mid-year adult population estimates from Statistics South Africa by age, sex, race, and province. This allows the data to be generalisable to the country.

In terms of the employment profiles of the respondents: 36% of participants are unemployed, 10% had informal/part time work, 9% were self employed.

Approximately one third of participants stated their community type was a township (35.1%) and rural residency accounted for 20.2%. 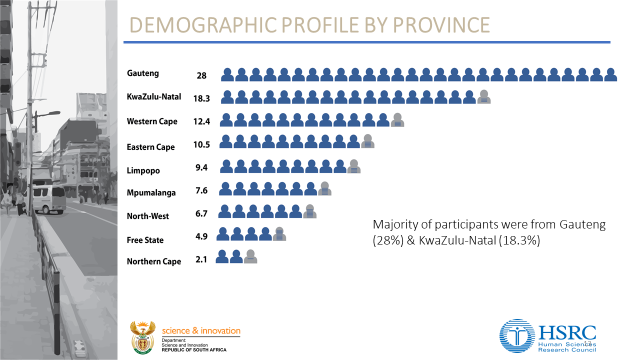 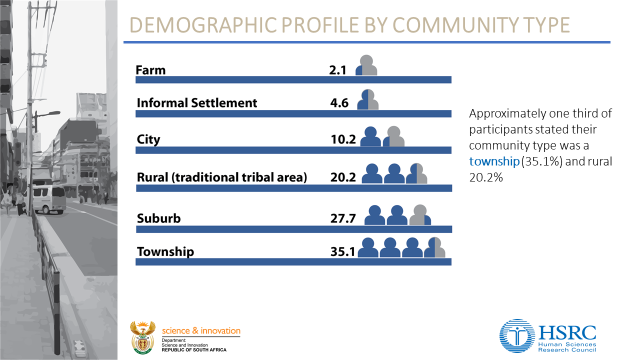