Government encourages  every sector of society to reflect on the progress made and the challenges that the nation has faced over the past 20 years.

The celebrations will strengthen relations with other African countries and the world. In 2013 the African continent celebrated the 50th anniversary of the Organisation of African Unity (OAU). We remain grateful to the continent and the international community for supporting us in the struggle for liberation.

We must never forget that our democratic birth was rightly hailed as a miracle.  Doomsayers and those who wanted us to fail had predicted chaos and civil war.  However, none of these things came to pass and the values of democracy and freedom of our birth still endure today.

South Africa has abandoned its shameful past and has steadily moved towards building a new culture based on respect of human rights and dignity.

Compared to before 1994 we can proudly proclaim that millions of people now have water, electricity, sanitation and housing. By our own standards, we declare that this is not good enough; that we must not rest until all the people can claim a better life.

While celebrating our achievements we must also look forward to the next 20 years.

The National Development Plan (NDP) is our roadmap. The plan outlines the type of society we are striving for in 2030, where no one is hungry, where everyone is able to go to school and further their studies if they wish, where work is available, where everyone is making a contribution because each person has been provided with what they need to reach their full potential.

South Africa is a much better place to live in now

Read more about the way life has changed in South Africa: South Africa is a much better place to live in now.

What does 20 Years of Freedom mean?

As the nation prepares to celebrate 20 Years of Freedom many people will no doubt ponder what freedom means?  Some will point to our maturing democracy which entrenches the rights of all as evidence of our freedom.  Others may highlight important issues like freedom of speech, or human dignity.

As we focus on the benefits of freedom we should also reflect on the strides we have made in achieving the vision of a better life for all.  Much has changed since 1994 and there has been progress in every sphere of society, but we are aware that more must still be done.

Although challenges remain there are more things that unite us as South Africans than push us apart. As a collective we should all take pride in what we have achieved as a nation and push ahead as we together continue to build on the progress we have made.

The findings from the GCIS National Quantitative Tracking Study Quarter 3 (July – September) 2013 offer fascinating insight into the views of ordinary South Africans on the meaning of freedom.

The public’s response in regard to celebrating our 20 Years of Democracy [Freedom] in 2014 was overwhelmingly positive. Reasons stated pertain to our freedom and democracy, and our unity as a nation. Those who opposed the idea did so mainly because they believe that there has been little change or improvement, and that there is still inequality in South Africa.

The major achievements of our 20 Years of Democracy [Freedom] are seen to be freedom, democracy and peace. Other achievements include improvements in education, house and housing subsidies for those who need it, more racial equality and access to basic services.

We must continue to strive for a better life for all.

We must build on our freedom and democracy. 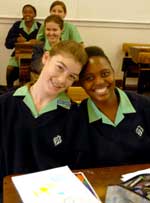 We must continue to break down barriers which divide us.