Celebrating The Freedom Charter, Enjoying Equal Human Rights For All 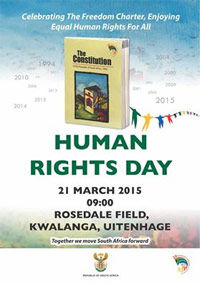 Human Rights Day is a national day that is commemorated annually on 21 March to remind South Africans about the sacrifices that accompanied the struggle for the attainment of democracy in South Africa.

The commemoration provides the country with an opportunity to reflect on progress made in the promotion and protection of human rights.

The 1960s were characterised by systematic defiance and protest against apartheid and racism across the country. On 21 March 1960, the community of Sharpeville and Langa townships, like their fellow compatriots across the country, embarked on a protest march to march protest against pass laws. The apartheid police shot and killed 69 of the protesters at Sharpeville, many of them shot while fleeing. Many other people were killed in other parts of the country. The tragedy came to be known as the Sharpeville Massacre and it exposed the apartheid government’s deliberate violation of human rights to the world.

Government will host various activities throughout the Human Rights Month to remind all South African to continue working together to uphold the culture of human rights. Human Rights come with responsibilities and we all have the responsibility to build a society that respects the rule of law.

Whether we are at the work place, within communities, at schools, or with our partners and children, we all need to demonstrate the kind of responsibility that we would like to see in our country’s future.

We all have a responsibility to ensure that our human rights record and history are preserved and strengthened for future generations.