Saving lives one pill at a time

Over the past two decades, we have lived through history as it unfolded right before our eyes. Who can forget the hope we felt when former President Nelson Mandela was released from prison, or the pride we felt when we voted for the first time in 1994, and how we cried with joy at the birth of our new nation.

As we move towards the celebration of the 19th year of Freedom, another milestone was made in changing the lives of South Africans for the better. On Monday, 8 April 2013 we witnessed history unfold once again as a single dose ARV pill was unveiled in South Africa for the first time. To describe this as a ’miracle‘ would perhaps be a step too far.

However, a look back into history shows just how far humanity has come in fighting what once was a fatal disease. Thirty years ago AIDS emerged as a mysterious deadly disease with no known cure. It was a dark time because humanity was faced with a threat for which there were few answers. Speaking on World Aids Day in 2011, President Jacob Zuma reminded us what a frightening and uncertain time it was, saying. “Today is a special anniversary because the world is marking 30 years since the virus that causes AIDS was discovered on June 5, 1981 in Los Angeles, California.”

“It was a difficult and baffling moment for both ordinary people and the medical fraternity, as we all tried to come to terms with this new mysterious but devastating condition,” he added.

The despair from 30 years ago has been replaced with hope and a renewed sense of optimism. HIV and AIDS is no longer a death sentence and we are seen as a beacon of success and hope in the global fight against the pandemic.

The massive roll-out of life-saving ARV’s since 2009 has saved countless lives and given hope where there once was none. At the beginning of April 2013 there were about 1.9 million patients on ARV treatment in South Africa. The norm for those living with HIV is to take a daily’ARV cocktail’ of between three and five pills.

Under the new roll-out, patients will only have to take one pill, which is expected to ensure greater compliance with the ARV regime. "We will be starting with newly diagnosed HIV positive persons eligible for treatment, HIV positive pregnant women and breast-feeding mothers," said the Minister of Health Dr Aaron Motsoaledi when he formally launched the programme in Ga-Rankuwa, north of Pretoria.

The fixed dose combination is multiple antiretroviral drugs combined into a single pill. Its greatest benefit is that it reduces the pill burden, it is also easy to take, highly effective and is in no way inferior to taking a number of drugs.one dose ARV poster

For people living with HIV the fixed dose ARV will be life changing.

Anyone who has ever taken any medication knows that you are advised to take it with or after meals. With one pill, instead of three or more compliance is likely to increase resulting in more lives being saved.

At the Ga-Rankuwa launch one of the first beneficiaries of the new treatment was Andrew Mosane (26). He is the Gauteng secretary for the Treatment Action Campaign, and said that the new drug will make his life easier. "You're just going to take it once, and it's just going to be less pill burden, people are tired of taking many drugs on a day to day basis," he said.

The South African National AIDS Council (SANAC) has also welcomed the new single dose ARVs. "This is simplifying the way patients have become used to taking ARV treatment," said the council's CEO Fareed Abdullah. "We have come a very long way since the advent of anti-retrovirals. At one point, patients used to take up to 16 pills a day," he added. 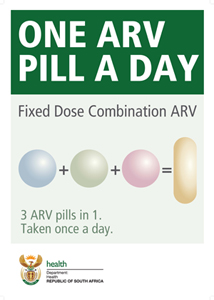 The new regime is not only revolutionary it is also extremely affordable. Speaking at the launch Minister Aaron Motsoaledi explained that the drugs were secured at a record-low price and will cost R89 a month per patient. "Before 2010, we were buying the most expensive ARVs in the world. Now we are a country where the ARVs are the cheapest in the world," said Minister Motsoaledi.

Our ARV programme is the largest in the world and the Department of Health hopes to expand this to 2.5 million people by the end of 2014. However, we are aware that we must continue to invest in sustainable HIV treatment and prevention programmes as part of our commitment to fight new infections.

In 2010 President Jacob Zuma launched the nationwide HIV counselling and testing (HCT) campaign to encourage South Africans to know their HIV status. This campaign proved extremely successful with over 20 million people being tested for HIV thus far.
The miracle of modern science has given renewed hope to people living with HIV and AIDS. Each passing year brings new breakthroughs and further progress. However, we ultimately want a society where there are zero new HIV infections.  We call on all South Africans to play their part, to get tested and to know their status. Let us educate ourselves and our children about HIV, so that we can prevent it.