Gender violence concerns all of us

The recent brutal rape, serious bodily harm which was inflicted, and subsequent death of 17-year old Anene Booysen shocked all South Africans. What was even more disturbing was that one of the attackers was her 23-year old former boyfriend - whom she identified before she died. Most of us found it difficult to understand how a previous partner could commit such an inhuman and cruel crime.

In the wake of the recent incidences of violence against women and children, South Africans formed a united front, responded with outrage saying "enough is enough" and turned to the streets to protest. Others wore black for a day to show support against rape. As Government Communication and Information System (GCIS), we added our voice as public servants who also happen to members of society by picketing and distributing pamphlets to the public. But alas, this can never be enough to the challenge facing the country on gender based violence!

Over the next few months we will no doubt follow the court case of both Anene Booysen and many more cases of gender based violence. How many more new cases will continue being recorded whilst we continue to picket.

Studies on gender violence paint a dismal picture. A 2012 Research Brief by the Medical Research Council (MRC) based on data collected between 1999 and 2009, states: "…homicide in South Africa is declining, but gender-based homicides are disproportionately resistant to the change while rape homicides have proportionately increased". Their 2009 data also indicated that 57 per cent of murders of women were committed by intimate partners.

During his State of the Nation Address, President Jacob Zuma made our stance abundantly clear: "The brutality and cruelty meted out to defenceless women is unacceptable and has no place in our country." It is for this commitment by government that constant

It is for this commitment that government last year established the National Council on Gender Based Violence which comprises of government, non-governmental organisations, research institutions, men's and women's groupings, and various other stakeholders. The Council will, among others advice government on policy and intervention programmes to fight gender-based violence. Through this Council government hopes to work with society in crafting intervention strategies of stopping gender based violence.

President Zuma also directed law enforcement agencies to treat gender violence cases with "the utmost urgency and importance". Consequently, the Family Violence, Child Protection and Sexual Offences Units increased its staff complement. During the last financial year, the Units secured over 363 life sentences, with a conviction rate of 73 per cent for crimes against women above 18 years old and 70 per cent for crimes against children under 18 years of age.

From the judiciary side, the Minister of Justice and Constitutional Development Jeff Radebe stated that government had taken "a conscious decision to re-establish sexual offences courts to complement the work of the sexual offences unit in the police". He added that his department is working ensure that sexual offences cases are placed on a prioritised roll. It is also working on strengthening the case-flow management system to ensure that "the chain from investigation to trial stage is watertight".

The Protection from Harassment Bill is another measure that will be introduced, since the Domestic Violence Act only provides protection to persons who are in a domestic relationship.

Having indicated all these government programmes, one has to hasten to say government cannot on its own win this fight. We need political, community and religious leaders to live by example and continually address the topic of inappropriate male behaviour toward females. Mostly, we need South Africans with influence to society- religious leaders; artists; teachers, parents; politicians; youth leaders - to use their respective platforms to condemn unacceptable gender behaviour.

The Mail and Guardian quotes University of the Free State Rector Professor Jonathan Jansen on the issue of gender violence, saying South Africa needs to look at "how we raise our boys and teach them to socialise".

As society we need to ensure that our children learn about appropriate male-female relationships in their family units from a young age. We call on all fathers and heads of families to treat females with the respect and honour they deserve. Parents should make it a priority to speak to their sons about correct behaviour towards females and they should also act as role models. 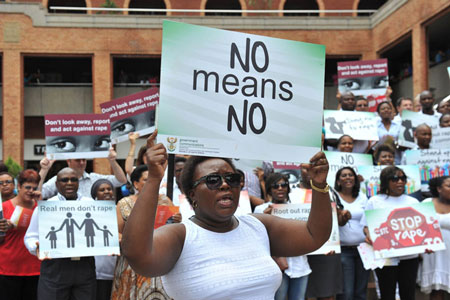 Communities and families often ignore signs of obvious and subtle signs of abuse and gender violence. It affects us all and we need to speak out against it. We call on every South African to report any abuse to authorities, but mostly also to offer support to those affected.

To all women in physical and verbal abusive relationships: let today be the day that you take control. Never believe your children are better off in such a troubled environment. Senior researcher at MRC, Dr Naeemah Abrahams, commented on SAfm recently that "men who commit violence against women probably have grown up in households where the same happened". Break this vicious cycle and find a safer place for you and your children where they can learn about healthy gender relations.

Government wants to emphasise that, domestic violence or any form of gender violence is not only of concern to women. Let us work together to rid our society of these heinous crimes so that we live in a country where every woman and children can feel safe at home and in public. Let us not look away were gender based violence is taking place. This is the war for everyone to get involved.