31 October 2012
It’s not all doom and gloom for South Africa’s economy as some of the financial pundits and international rating agencies will have us believe.
Despite South Africa facing a slowdown in growth to a revised 2.5%, it is still on course to ride out the storm and emerge stronger and more resilient.
Government remains firmly in charge of the country’s finances and has set a clear plan to guide the economy through the medium to long-term.
The Medium Term Budget Policy Statement (MTBPS), which details our spending plan over the next three years, sends a strong message of prudent fiscal discipline. It emphasises the tough decisions to be taken as the country continues to move forward.
In the face of a prolonged global economic downturn, government has frozen new expenditure and capped increases in spending to 2.9% a year over the next three years.
In presenting the MTBPS, Minister of Finance, Pravin Gordhan, said: “For the Medium Term Expenditure Framework (MTEF) period ahead, public expenditure will remain at the level set in the 2012 Budget, in keeping with sound medium-term fiscal guidelines.”
The freeze on new expenditure will not in any way impact on our social commitments. We will continue to deliver social grants to the most needy and vulnerable in society, provide free services at public health facilities, build houses, provide water, electricity to poor communities, and continue to support future generations through no-fee schools for 60% of learners.
Gordhan emphasised that additional resources to support the economy will be generated from efficiency gains, savings and reprioritisation. Over the MTEF period, R40bn in spending has been reprioritised.
We have again silenced those critics and cynics who refuse to acknowledge our proven track record of sound fiscal discipline. Since 1994 the fiscus has been managed in a balanced and responsible way, an approach that has always characterised our democratic dispensation.
The key economic reforms undertaken by government have given rise to a high level of macroeconomic stability. This in turn has led to a reduction in taxes, lower tariffs, control of the fiscal deficit, a relaxation in exchange controls and the provision of much needed social services and infrastructural development.
While the impact of the recent wildcat strikes in the mining sector and the ratings downgrade cannot be ignored, it is not what defines our economy.
UK Secretary of Business, Innovation and Skills, Vince Cable, recently led a business delegation to the country and said that South Africa had many “fundamentals that are attractive to investors”.
Cable stated: “The assessment of serious investors here is that South Africa is an open economy and approaches foreign investment in a positive and welcoming way.”
As a nation we cannot afford to talk down our economy and undo the achievements accomplished over the last 18 years in building a resilient and vibrant economy. 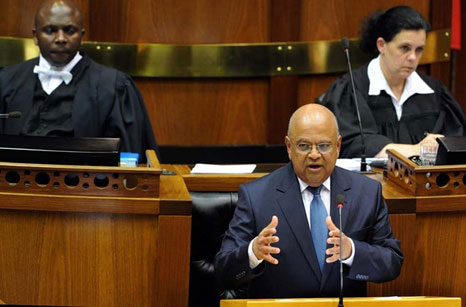 It is through the fiscal consolidation in the early years that we recorded the first-ever budget surplus in 2007 that allowed us the space to counter the global economic recession by spending when other countries were forced into austerity.
Speaking at the recent Presidential Infrastructure Investment Conference, President Jacob Zuma said: “We have to promote our country and boost confidence in the economy so that it can grow and create jobs.”
The president added: “We have to create the right environment for economic growth. During this period of a global economic downturn, we urge those who have access to the media from all sectors, including opposition politicians, to stop talking our country and economy down.”
Our economic talking points include a sustainable debt to gross domestic product (GDP) ratio. This month our government bond market was the first in Africa to be incorporated within the influential World Government Bond Index (WGBI), which is tracked by investment funds estimated at $2-trillion (R17.4-trillion).
Ernest Battifarano, WGBI global head of index development and production, said: “We are delighted to welcome South Africa into the WGBI. There are 12 South African government bonds in the index, with a market value of $93.8bn (R816bn), and their appearance in the WGBI affords the opportunity to investors to gain exposure to this exciting market.”
Furthermore, the budget deficit will narrow from 4.8% of GDP in the current year to 3.1% of GDP in 2015-2016.
It cannot be overemphasised that the budget deficit is a result of our counter cyclical approach of spending to grow the economy to combat the global economic recession and not due to overspending.
Gordhan noted that while our deficit will be reduced over the period ahead, ours will not be a path of fiscal austerity. As a nation we continue to invest in infrastructure and social commitments in a manner that ensures future generations will not be burdened.
Our strategic infrastructure programmes represent large and long-term financial commitments such as the building of rail, roads, ports, energy, healthcare facilities and schools. Such programmes will create jobs and boost the economy of the country.
Phumla Williams is Acting CEO of the Government Communications and Information System (GCIS)