The biggest test yet for education

12 September 2012
Every child deserves to dream big, to aspire to be the best and to soar far above their greatest expectations.
The government understands that every child’s dream starts with a firm foundation and that quality education is the doorway to making dreams a reality.
In helping to build this foundation the Department of Basic Education will next week conduct the largest test ever undertaken in South Africa as part of the annual national assessments (ANA). 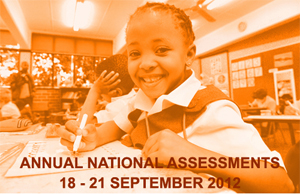 More than 7 million pupils in the foundation (grades one to three) and intermediate phases (grades four, six and nine) in all public schools and certain independent schools will be tested on their language and mathematics skills.
ANA draws on the government’s experience and participation in a number of international programmes and the assessment is a world-class initiative that places us on par with a range of countries, including the US, that conducts its own assessment through the national assessment of educational progress (NAEP). The government places great emphasis on these assessments.
They help diagnose problems in the education system. They also enable targeted interventions in a national priority that is critical to developing the nation’s potential. Because our education remains the cornerstone of all our efforts as the government; it is one of our five priorities.
As a nation we allocate up to 20% of our national budget and more than 5% of GDP to education, placing South Africa in line with highly developed countries such as the US, Netherlands and Austria.
Our spending on education has resulted in increased access to schooling with Grade R enrolments more than doubling from 300 000 in 2003 to 705 000 in 2011.
More young South Africans are accessing basic education and completing Grade 12 which rose from 62.5% in 2008 to 70.2% last year.
More young people are also completing Grade 9 which increased from 80% in 2003 to 88% in 2010. Because the government’s financial commitment has not always translated into the gains we have wanted in some areas, ANA is an important means to identify and fix problem areas.
In South Africa we have historically relied on measuring the performance of pupils at the end of their schooling, which is often too late for meaningful intervention.
A credible measurement of the quality of teaching and learning below Grade 12 was needed. Without credible monitoring it would be impossible for parents and teachers to know what action should be taken.
In February 2010, President Jacob Zuma announced new measures to boost the country’s education system which included all grade three and six and a sample of Grade 9 pupils writing annual national assessments.
The purpose of the assessments is to benchmark literacy and numeracy levels so that this can be measured against our own targets.
We have set a benchmark of 60% of pupils attaining acceptable levels in literacy and numeracy by 2014. However for many of our critics the ANA results are an end in themselves and used to bemoan the work undertaken in education. This even though the government is the first to acknowledge the country’s education challenges and is working towards finding lasting solutions.
Last year’s assessments concluded that many primary school pupils were struggling with basic literacy and numeracy. Pupils were finding it difficult to switch from being taught in their home languages to English or Afrikaans in Grade 4, and to cope with the increase in the number of subjects from three to eight.
Through the ANA we are helping reverse the effects of apartheid which left us with an unequal, fragmented system.
The government’s commitment to this assessment is demonstrated through its R75m allocation to the programme and by expanding assessments to include Grade 9 for 2013/14 with a budgeted R160m in 2014/15.
Minister of Basic Education Angie Motshekga said: “While there is no quick fix, we are confident that our interventions will bear fruit in the years to come, especially since we are now in a position to measure their impact.”
Interventions include greater emphasis on the development of basic skills – reading, writing and numeracy – at the foundation levels.
The department has distributed more than 15000 learning packs used by teachers from grades R to 3. The ANA results help direct schools in their academic improvement plan and enables school governing bodies to compare its results with other schools in the district.
Information from ANA is used to direct teachers towards development programmes and helps them identify challenges in the curriculum. It gives a clear indication of any additional learning materials that must be developed to support teaching.
For example, should assessments indicate that pupils struggle with fractions, teachers can be empowered with innovative ways to teach the topic. In areas where the assessments show that children do not read at the level they should, the reading strategies at such schools are revisited.
ANA also provides parents with a clearer picture of their children’s performance to support their studies at home. These assessments diagnose problems with language and mathematics at an early, remediable stage.
Government encourages parents and guardians to support their children during these examinations and help them build their confidence. Literacy and numeracy have been identified as critical competencies which, when enhanced, translate into improvements in other subjects. We must all play our part to ensure that our children attend school every day, are on time, learn how to read and write, count and calculate, reason and debate.
By working together we can make our schools work and ensure that quality teaching and learning takes place.
Phumla Williams is Acting CEO of the Government Communications and Information System (GCIS)