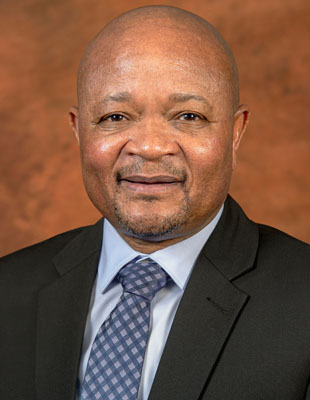 The Minister of Water and Sanitation, Mr Senzo Mchunu, is an alumni of the University of Zululand and the University of South Africa, where he obtained a BA degree in Education and International Relations. His entry into Government began as a High School Educator, at St Augustine’s High School (Nquthu, Northern KwaZulu-Natal) whereafter he was subsequently transferred to Impande High School in Eshowe.

He went into politics full time in 1991 and was appointed as the first Regional Secretary of the African National Congress (ANC), of the then Northern Natal Region. In 1994, he was elected the first Provincial Secretary of the ANC in KwaZulu-Natal. He became an ordinary member of the KwaZulu-Natal Legislature in 1997, until his appointment as Chairperson of the Agriculture Portfolio Committee.

Between 2002 – 2004, Minister Mchunu served as the Chairperson of the Social Development Portfolio Committee and again, served in the same capacity in the Portfolio Committee of Education between 2004 and 2009. He became MEC for Education in KwaZulu-Natal between 2009 and 2013. Minister Mchunu was thereafter elected Provincial Chairperson of the ANC in 2013 and served as Premier of KwaZulu-Natal between 2013 and 2016.

President Ramaphosa appointed Mr Mchunu as Minister for Water and Sanitation on 5 August 2021, after having served as the Minister for the Public Service and Administration.