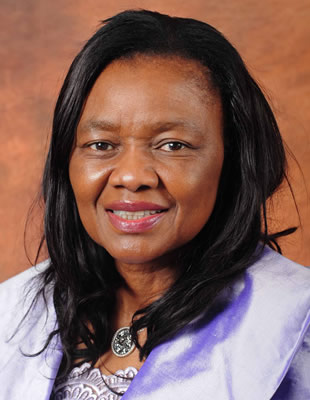 Professor Hlengiwe Buhle Mkhize is the Deputy Minister of Presidency for Women, Youth and Persons with Disabilities of South Africa the position he was appointed to on 30 May 2019.

Prof Hlengiwe Buhle Mkhize was the Minister of Higher Education and Training of the Republic of South Africa with effect from 17 October 2017 until 26 February 2018.

She has been chairperson of the Peace Commission of the South African Women in Dialogue since 2004; she is treasurer general of the African National Congress (ANC) Women's League (ANCWL), and has been a member of the National Executive Committee of the ANCWL since 2008.

From 1990 to 1995, she was a senior lecturer and researcher at the University of the Witwatersrand. From 1995 to 1999, she served in the interim BEC of the ANC in Sandton from 1995 to 1999; and from 1999 to 2000, she served as deputy chair of the ANC?s Sandton BEC and as ANC zonal chairperson, in (Alexandra Township, Sandton and Johannesburg East).

Between 1991 and 1995, Prof Mkhize also served in the ANC BEC in Diepsloot; in the National Conflict Resolution Centre Action Committee Against Violence; in the National Women's Resource Centre; as board member of the Human Rights Foundation, and the Goldstone Commission Committee to clarifying the status of traumatised children.

From 1994 to 1995, she was a board member of the South African Prisoner's Organisation for Human Rights; and from 1995 to 2003, she was a commissioner of the Truth and Reconciliation Commission and chairperson of the Reparations and Rehabilitation Committee. From 1996 to 2004, Prof Mkhize was a member of the Peace Accord Secretariat and later trustee of the National Peace Accord Trust.

Between 2001 and 2005, Prof Mkhize was chairperson of the FAZE 2 Civil Society Organisation after the World Conference Against Racism and served as reparations officer in the President's Fund located in the Ministry of Justice.

Between 2001 and 2004, Prof Mkhize was secretary of the ANC Havana City Branch. During the same period, she was the chairperson of the ANCWL, and she was elected by civil society in her residential area to serve as a health representative within the local Councillor's Committee.

Prior to her appointment as Deputy Minister, Prof Mkhize served as Ambassador of South Africa to the Netherlands from 2005 to 2008.

Prof Mkhize has published in international journals such as
Source: Deputy Ministry of Correctional Services