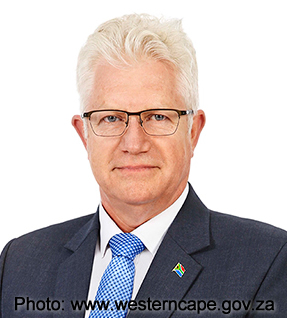 Alan Winde was sworn in as Premier of the Western Cape Provincial Government on 22 May 2019.

He was first elected to serve as Member of the Provinical Legislature in 1999, a position he held for 10 years before the DA was voted into power in the province. Between 1999 and 2009, he served in various political roles, including as Chief Whip of the official opposition and also as the Western Cape Provincial Finance Chairperson. In 2009, he became the Western Cape MEC for Finance, Economic Development and Tourism. In 2014, he became MEC for Economic Opportunities, in charge of the Department of Agriculture and the Department of Economic Development and Tourism.

Alan Winde was born on 18 March 1965. Before he began his career in politics, he started and successfully operated 10 businesses in his hometown of Knysna. In 1996, he ran as an independent candidate and was successfully elected to the South Cape District Council. Following this, the leadership of the Democratic Alliance (DA) approached him to run for provincial Parliament in the Western Cape, and he gladly accepted.