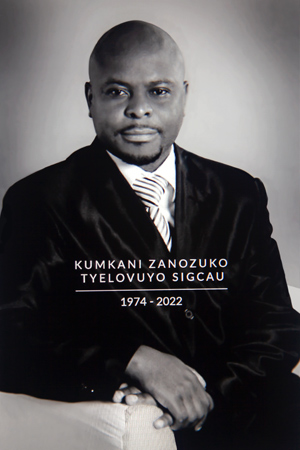 President Cyril Ramaphosa extends his heartfelt condolences to the Royal Family and nation of the amaMpondo Kingdom following the passing of His Majesty King Zanozuko Tyelovuyo Sigcau (Zanozuko!!!).

The King passed away late on Tuesday, 31 May 2022, following a period of illness.

Kumkani Tyelovuyo Sigcau (Zanozuko!) was the first King to be recognised in this capacity during the term of President Ramaphosa, who engaged the King on numerous occasions on service delivery and local development initiatives residing under the District Development Model.

The President said:” We reach out in mourning to the amaMpondo Kingdom at the passing of a distinguished leader who made an important contribution to uniting the Royal Family and the amaMpondo community, which are important constituents of our greater nationhood.

“While Kumkani Zanozuko was a proud and respected custodian of customs and traditions that were centuries old, he was equally passionate about the socio-economic development of the Kingdom and the greater Eastern Cape Province for centuries into the future.

“He was a fervent proponent of integrated development as facilitated by the District Development Model in the OR Tambo District Municipality and he reached out to other Kings in the province in his enthusiasm for the Eastern Seaboard Development Initiative.

“The outcomes of the recent Summit on Communal Land Administration and Tenure serve as a means for us to honor and realise Kumkani Zanozuko’s vision for the amaMpondo nation and for our country more broadly.

“May his soul rest in peace.”