State of the Nation Address 2021

President Cyril Ramaphosa will deliver the State of the Nation Address on 11 February 2021 at 7 pm.

The State of the Nation Address (SONA) is called by the President in terms of Section 42(5) of the Constitution. It is a joint sitting of the two Houses of Parliament and one of the rare occasions that bring together the three arms of the State under one roof.

SONA provides the President with an opportunity to speak to the nation on the general state of South Africa, to reflect on a wide range of political, economic and social matters within the domestic and global contexts, to account to the nation on the work of Government and to set out Government's program of action for the coming year. Traditionally, the President makes key Government announcements during this important joint sitting of Parliament.

Since late last year, Parliament has been preparing for SONA by engaging various stakeholders. SONA in its nature is a ceremonial joint sitting of the two Houses of Parliament, called specifically for only one item on the agenda, the President's State of the Nation Address. The sitting is presided over jointly by the National Assembly Speaker and the National Council of Provinces Chairperson under the applicable joint rules of Parliament.

In strict adherence to the National State of Disaster regulations, this year’s SONA will take the form of a hybrid joint sitting, with at least no more than 50 Members of Parliament, representatives from the Judiciary and the Executive in the physical chamber and the rest of this category connecting virtually. Other categories that will virtually form part of this important event include Premiers, Speakers and other special delegates representing provinces in the National Council of Provinces, eminent persons, diplomatic corps, distinguished guests and members of the public.

Due to the limited number of persons permitted within the precincts of Parliament, and Parliament’s sensitivity to the prevailing conditions, various ceremonial aspects that usually characterise the SONA have been suspended. In this regard, there will be no red carpet and procession of the three arms of the state, physical participation of junior and civil guard of honour, eminent persons, Imbongi, military parade that leads the presidential procession onto a saluting dais on the steps of the National Assembly, the guard of honour by the National Ceremonial Guard and the 21-gun salute.

Where possible and appropriate, some of these traditional features shall take place virtually in keeping with the significance and character of the Address.

President Cyril Ramaphosa will physically deliver the SONA from the National Assembly Chamber at 19h00. 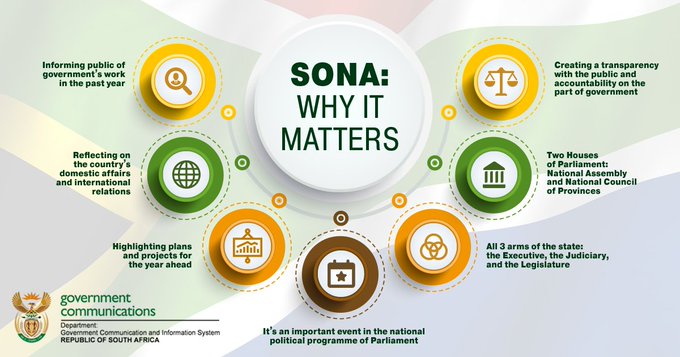